Posted by mikeland82 on February 9, 2020 in Miniatures, Modelling

Here are the next two Orks in the Heroquest 28 project. These two represent the other two weapon types from the original HQ box. The mace and the cleaver. I also added a few details such as the skull trophy and the shields. I think these look quite a bit more vicious than the ones supplied in the Original game, but that fits well with the HQ 28 vibe.

I have also sourced a box, this will become the box for the whole game, it is from the Works book shop In the UK.

Posted by mikeland82 on February 5, 2020 in Miniatures, Modelling

Fimir where always going to pose the biggest challenge in this project as there is no direct equivalent in the current Games Workshop range. The Fimir were one of the creations original to Games Workshop in the early days of Warhammer fantasy, it is a shame they have let this race disappear, it would be nice to see them re-invented for AOS.
I know my kitbashing and green stuff skills are not good enough to to re-create Fimir so I decided that I’d kitbash Something to fill the slot, from early on I decided to use the beast man Gors as a basis.

In my mind these are some kind chaos beastmen, Twisted by the dark powers. I put in a couple of nods to the original Fimir, the weapons are the same and I gave them tails. I still have one more of these to make, I’m tempted to try to upgrade the design a little and give it a single cyclops eye… but that is a challenge for another day.

First of the deadly dungeon in habitants are these two Orks, I started with them as they have always been my favourite fantasy villains.

Like in the original game I want a mix of weapons. Cleavers, swords axes and maces… two of each weapon to make the compliment of 8 orks. Cleaver guy had changes to his left arm, weapon and helmet.

Axe also had a few changes, his right arm and weapon are from the WH40k ork bikers set, and his left arm was also modified to give him a stance a bit reminiscent of the HeroQuest orks.

Im quite happy with how these turned out, I think the dirty colour scheme helps avoiding them looking too comedic and cartoonish which can often be the case with modern Citadel greenskins.

These are the first two miniatures completed for my HeroQuest project.

Wizard
The wizard is kit bashed from a gene stealer cults magus, with a chaos marauder head. I wanted him to look like an older, and yet more powerful version of the Hero Quest wizard. I chose to give him a gloved right hand to add some narrative to the miniature, perhaps his hand is damaged and scarred from a spell gone awry ore a previous battle. It is also a sneaky nod to Luke Skywalker. After I kit bashed the mini I felt it had a look of old Luke about it, so I thought he really then had to have the gloved hand

Dwarf
I wanted this mini to look like a mash up of the classic dwarf from old school Warhammer and the new Khadaron Overlords. I also wanted hm to have the look of a well travelled treasure hunter. Head from Northstar, backpack from bolt action.

Lastly here is a sneak peak… initial design for the hero cards started.

“High adventure in the darker reaches of the mortal realms”

In 1989 MB games and Games Workshop teamed up to make the dungeon crawling board game HeroQuest. This brilliant game, packed full of minis and card furniture was a fantastic introduction to the world of Warhammer Fantasy. As a young teenager I loved this, and the subsequent spin-offs Advanced HeroQuest and Space Crusade.

I began to think how great it would be to have a new or revised version… but then again isn’t that what Warhammer Quest, and to an extent Warhammer Underworlds are… and it dawned on me if they did make a new HeroQuest I’d most likely kitbash and ‘grimdark’ the included miniatures into the AOS 28 Dark Age of Sigmar style I love. So with this in mind I decided to challenge myself in 2020 to create my own unique homage to HeroQuest in that style. HeroQuest 28.

Initial thoughts on some of the miniatures 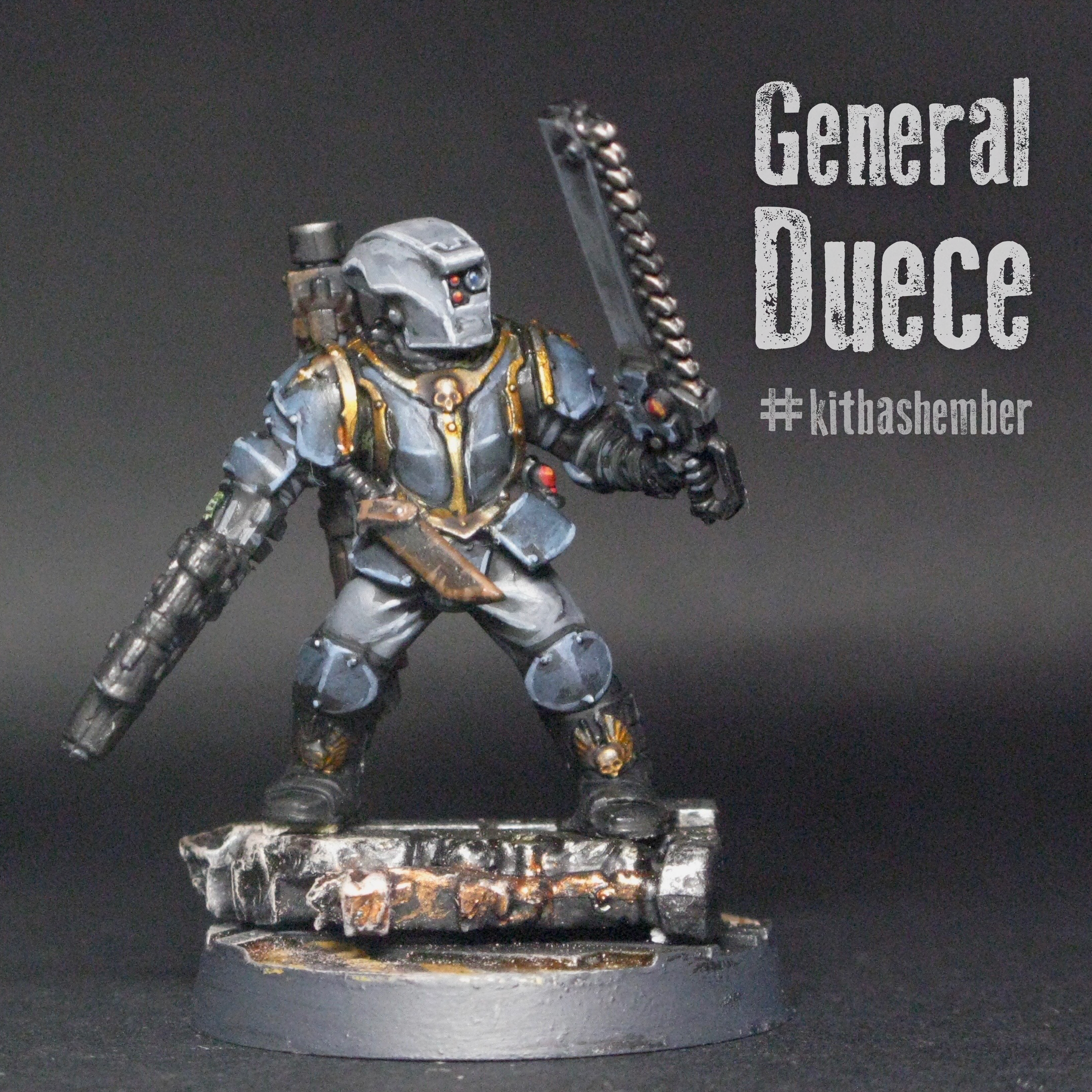 His men advanced in standard fire teams, moving almost silently through the rubble and debris, clearing the city streets one ruined building at a time. These men were the best, the toughest and most fearless, his ‘disposables’.

“Sector 13 clear General Duce,” a voice crackled over the comm  “shall we move on to the next one sir?” It was Sargent Jabe. Duce felt a cold tingle in his spine… he had been in  enough battles in enough forsaken places to know not to ignore his instincts.

“Negative, hold your position until we arrive, I don’t want you to become cut off,” He replied “We’ve not seen the enemy yet, but they are close, I can feel them, smell them in the air”

Without warning, almost as if his words were a cue the dark grey smog that surrounded the soldiers blazed with pin pricks of light. “Take cover, las fire” shouted Duce.

His men scrambled for shelter, the walls and ground around them exploded in puffs if dust as the laser rounds impacted. Some men weren’t quick or lucky enough and the lethal fire burned through armour, flesh and bone cutting them down.

Duce knelt behind a thick block of damaged wall, he pulled out his plasma pistol and sent a barrage of super heated rounds in the direction of the enemy fire. His men and their unseen foes exchanged blasts for an extended few moments and then for a brief second all fell silent. “Brace for an assault” yelled Duce, flicking the switch on his chain sword, the lethal weapon roared to life. The chainsword, not a weapon of finesse or subtlety, but the perfect instrument for a street brawl.

Menacing twisted half xenos mutants emerged from the dense fog, covering the ground between them and the disposables with surprising speed. Duce didn’t wait for them to attack, he knew enough about the power of motion and ferocity combined to be sure that simply waiting on the defensive was not going to be enough here. He lept over the wall swinging his weapon in a vicious arc. ”On me!” He roared the command to his troops.

His chainsword hit home cutting a swathe through cloth, armour and bone. The startled foes were unable to react quickly enough to the ferocity of Duce and his troopers counter attack, a dozen or more were slain before they rallied and fought back. By that point the momentum of their attack was broken. Still they determined to fight on. The largest of the xenos, clearly a leader, a hideous hooded hunchbacked mass of claws and poisonous weaponry lunged towards Duce, swinging is blade towards his head. Trooper McKinnon propelled himself from the ground, placing his body between the blade and Duce. The blow tore into him and his body fell lifelessly in a heap, he died as he had lived, in service of his beloved commander. His sacrifice gave Duce the few seconds he needed, spinning on one heel he brought the whirling chainsword round to meet the beasts next blow. Chainsword met blade in a clash of strength and will. The monsters blade sparked and strained before shattering sending splints of white hot metal into the air. Duce’s weapon carried on, the full momentum of his blow behind it. It was a well aimed blow, the creature’s head flew from it’s body, which tottered for a brief moment before crashing backwards to the earth.

Seeing their champion fall the remaining beasts silently began withdraw and dispersed back into the fog the had emerged from. Leaving Duce and his surviving men in the now eerie silence of the battlefield.

Posted by mikeland82 on January 10, 2019 in Miniatures, Modelling, Photos 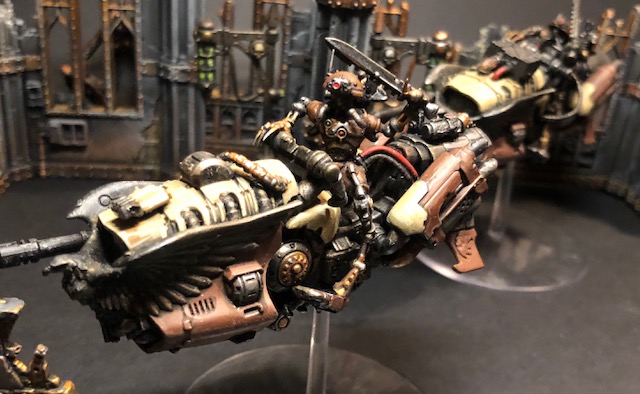 Captain Lorgan pulled the battered field viewer from his belt and held it up to his eyes, he flicked the on switch and the display sprang to life. He threaded the dial and the focus adjusted, homing in on the ruined buildings on the horizon. Slowly moved his gaze up to the ashen amber sky, scanning for any sign of movement. Flecks of dust and floating debris drifted across his vision.

Then he saw them, a series of specs moving across the screen. His thumb rolled across the dial zooming the display in on the fast moving objects, the blurred image came into focus.

“Get down lads, we’ve got in coming” He shouted, “Screechers”

His men scrambled for cover. His elite killteam were some of the best in the whole army but even these men were rightly wary of these flying terrors. They were upon them in seconds, locust like these flying machines swooped and fired, the skeletal half mechanical riders made no sound and showed no expression of emotion as they set about their deadly work. Laser rounds and missiles from the screechers tore into the ground and buildings around Killteam Lorgan.

“Return fire” snarled the Captain, rolling out from behind a wall and releasing a flurry of bolter round. The nearest screecher took the brunt of the blasts, its lower right arm was blown clean off, but this didn’t deter it. Turning it swooped down, killing blade in its remaining hand and landed a searing blow on the captain. The blade cut deep, up his back and through his shoulder. The Captain felt dizzy with the pain but fought through it and raised his gun again to fire. The screecher had again rounded and was heading straight for the wounded leader. The captain steadied his hand, but the waves of pain blinded his mind, pull the trigger his brain screamed, but his finger wouldn’t move.

The screacher, perhaps sensing blood, rushed down to slay it’s wounded prey. Its head exploded, almost silently, into a thousand tiny fragments. It’s now out of control flying machine span of and exploded into the dirt feet from the captain.

Lorgan looked over and nodded his thanks to trooper Hebbert, the finest sniper he’d ever known.

So called screechers are the piloted flying element of the Darkening Mind’s assault forces, heavily armed for both ranged and close combat, deadly and very fast these are formidable opponents for even the best troops.

These were kitbashed from various kits including the Adeptus Mechnicus Ruststalkers and the Adeptus Custodes jet bikes. 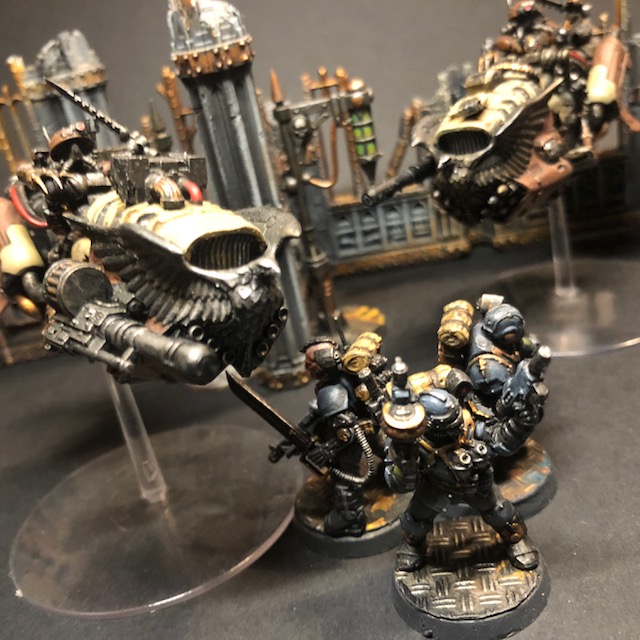 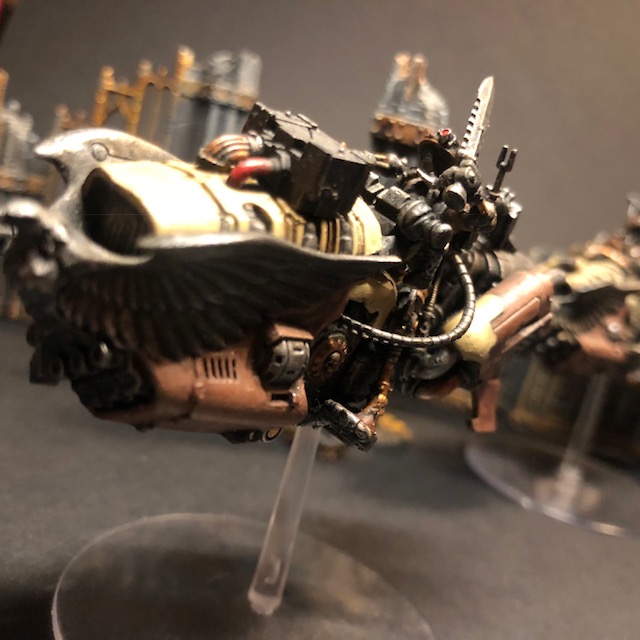 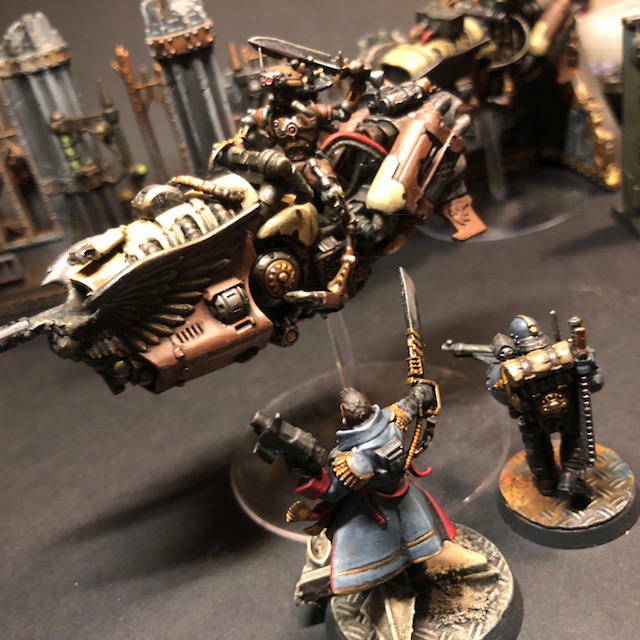 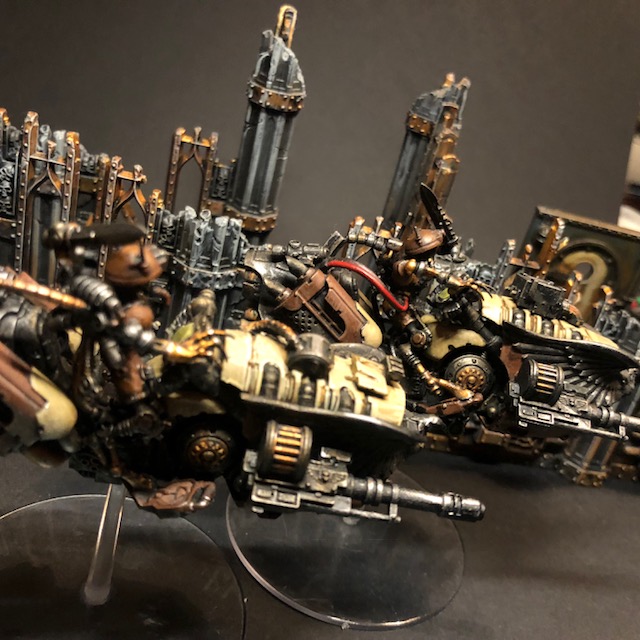 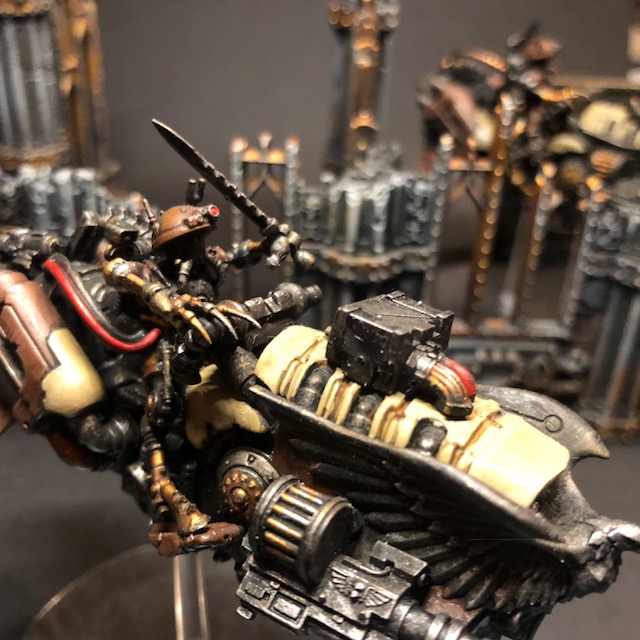 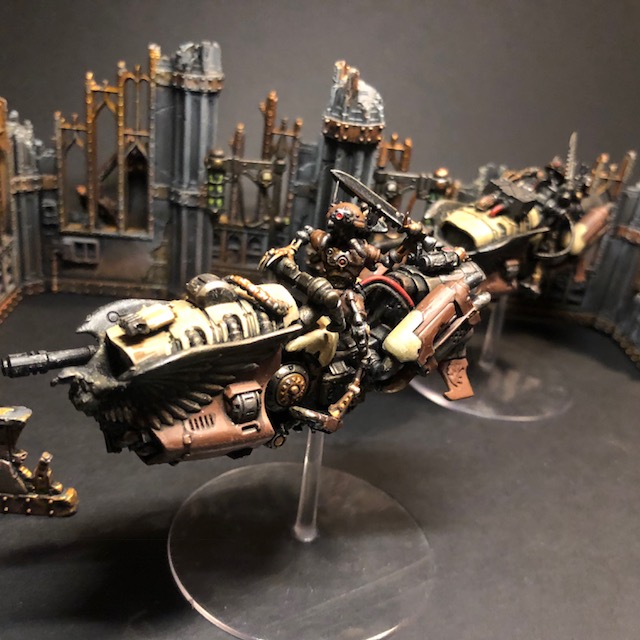 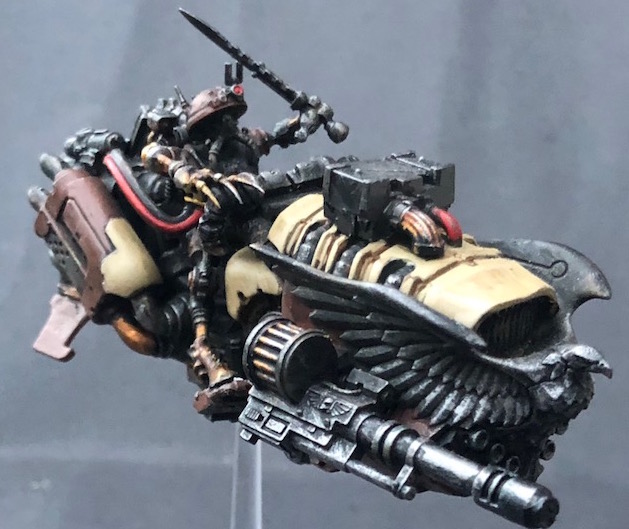 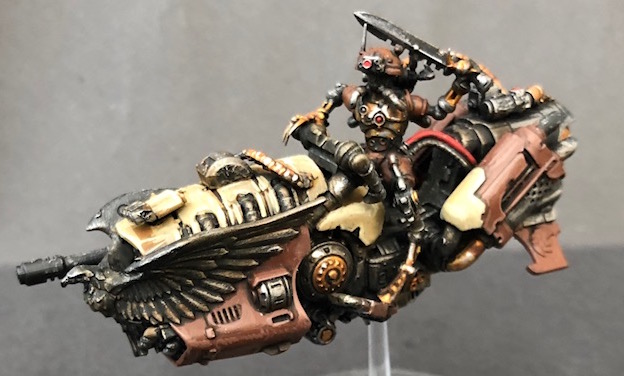 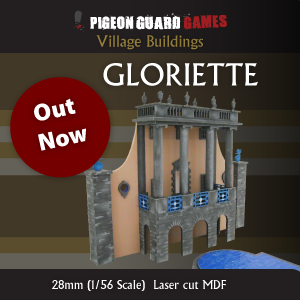 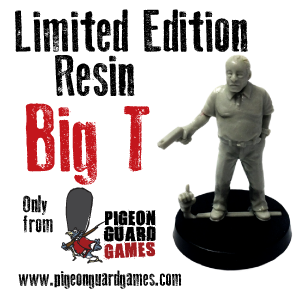 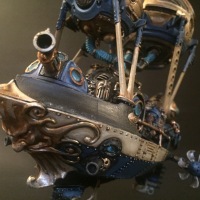